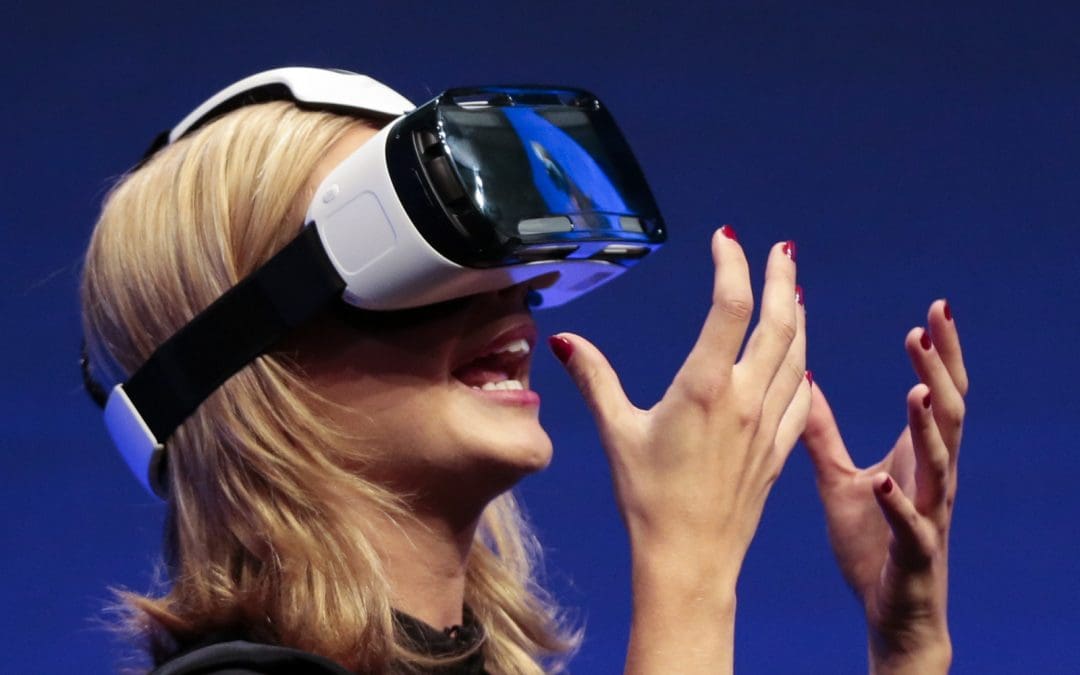 Virtual Reality in Business: How Companies Can Turn The Biggest Emerging Media Trend To Profit

The rise of the internet made a dramatic impact on business — but if there’s one emerging technology right now that’s continuing to evolve business practices, it’s something that’s actually been around since the web’s early days, virtual reality in business. 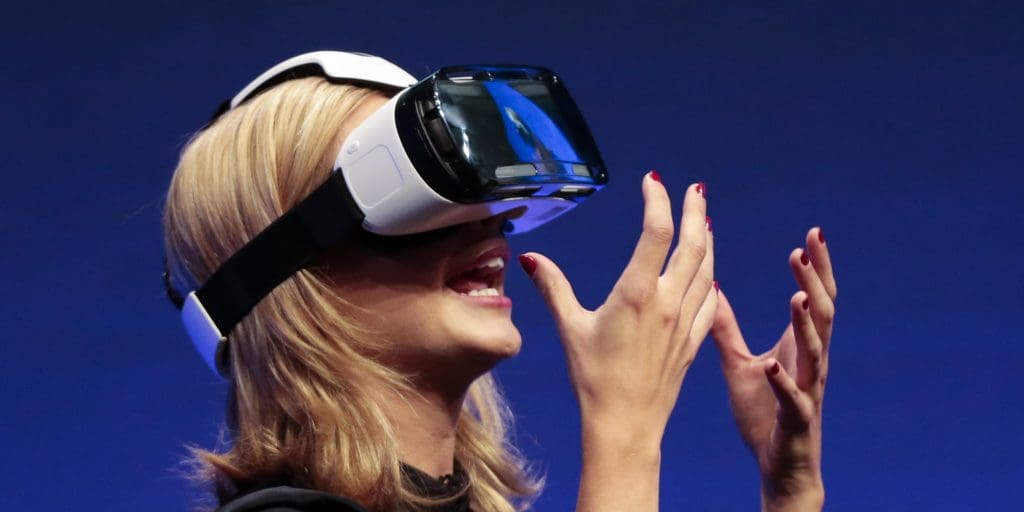 While VR has been used in gaming since the early 90s and the concept has been floating around since the 60s, the technology is just now beginning to show its full potential. VR takes the internet and turns it into more than just webpages, but a pseudo-physical place. VR has the power to turn the negatives of shopping online, like the inability to see a product from all angles, and turns it around, allowing customers to preview a product, place or even an experience, without actually being there.

But what exactly is VR, and how can businesses use it? What are the challenges businesses face in putting VR in place? Is it actually affordable enough for small to medium sized businesses? Like any new technology, there are some challenges to getting started, but VR has the potential to drastically improve the reach of even smaller businesses.

What is Virtual Reality? VR vs. 360 video

The definition of virtual reality isn’t hard to guess from just the name — it’s a technology that simulates reality inside a virtual experience. Viewers wear headsets so that they can actually move around inside of a virtual space, interacting with a scene and seeing something from all angles.

VR has been sold in consumer gaming devices since the 1990s but was put on a top shelf as technologies like the internet and smartphones advanced. Without the proper technology to create an experience that didn’t leave the user nauseated, VR remained largely something that was used just in gaming. However, the technology emerging since the 1990s has helped take the medium to a level that could be widely accessed by consumers, with graphics good enough to actually feel like reality, internet to take it anywhere and headsets falling in price.

360 video is a similar idea that’s becoming increasingly common, but it’s not quite the same thing as VR. In VR, users can walk around and interact with the space. And while 360 video viewers can see in all directions, they’re limited to the original perspective of the camera — they can’t move forward or backward within the scene or even kneel down or climb to a higher perspective, only turn in one spot. VR more closely mimics a video game experience where you can become a character and move around, while 360 is simply a video (or an image) that you can view from all directions.

Even though VR and 360 are quite different, the two terms are often used interchangeably. That’s because they have some of the same benefits, like providing more information for the viewer. Both can benefit businesses — but how?

How Can Businesses use Virtual Reality?

As a technology that’s really just starting to see the edges of its potential, virtual reality is very different — and that means businesses can use VR to stand out from the crowd (http://fortune.com/virtual-reality-business/). There are a number of different uses for VR (and 360) that deliver that wow factor and offer a big return on investment (http://www.cio.com/article/2983679/it-industry/is-virtual-reality-finally-ready-for-business-use.html?page=2). Here are just a few of the possibilities:

Street View & Virtual Tours — Remember how cool it was when Google Maps first started offering Street Views thanks to the little cars with the cameras mounted on top? Well, now some of those views are available in virtual reality. While Google is largely focusing on big destinations such as Stonehenge, businesses can create their own “street view” that allows customers to explore their physical location even if they don’t live nearby. While many different types of businesses can benefit from offering a virtual street view, VR tours are especially helpful for those in the tourism industry or reality. Imagine being able to allow visitors to tour an entire resort or attraction online, inside and out. Imagine allowing home buyers to visit a virtual open house from thousands of miles away. The possibilities are pretty big.

360 Product Previews — One of the biggest challenges for online retailers is that customers are often hesitant to buy a product they can’t really see. While virtual reality can’t (yet) mimic the texture of an object, it can give online shoppers a 360 preview and even allow them to see the product to scale. The technology could even create virtual dressing rooms for online clothes shopping. Technology even allows virtual reality product previews to be done in different color options for the same object. Virtual product previews give customers more confidence when buying online, even when it’s a newer product that doesn’t have many customer reviews.

360 How To’s — Instruction manuals are frustrating — but what if you could create tutorials in virtual reality, demonstrating the exact process virtually? Manufacturers selling products that require some assembly — or maintenance or tricks down the road — could see a much lower volume of calls (and complaints) to their help center.

Virtual Reality in Business: The Challenges

Like any new technology, virtual reality comes with it’s very own unique set of challenges. So what are the potential pitfalls businesses need to be aware of?

And to run good software, of course, takes some time. Creating a VR experience from start to finish is time intensive, from the planning and the shooting to the editing and distribution. With small business owners pressed for time already, the commitment required is a challenge.

So, how is virtual reality possible for smaller businesses?

VR is expensive, requires good software and equipment, and takes a significant time commitment — so is it even possible for small and mid-sized businesses? Or do all those hurdles make it impossible?

Virtual reality, in it’s current state, is too new for businesses to tackle themselves. Except for the largest companies that are able to staff entire departments dedicated to the task, virtual reality isn’t a DIY project for small businesses.

New technology is making virtual reality creation simpler, requiring more gear but smaller time commitments. Small businesses, then, can often pick up the gear and offer virtual reality projects to other businesses for a lower price than they could attempting to staff and fund the venture on their own.

Virtual reality companies are able to work together with businesses to plan and implement virtual reality, from interactive street views and tours to large scale marketing projects. While companies specializing in VR are able to significantly reduce the associated costs, at the same time, specialty companies offer more insight into the new technology than staff with marketing backgrounds.

As small businesses like VisionAir expand to offer virtual reality, consumers are picking up on the new trend at a rapid pace. Virtual reality goggles are both becoming more advanced and more accessible. Google cardboard, for example, makes VR accessible with a simple box that turns a smartphone into a pair of virtual reality glasses — they cost just $15. New virtual reality apps are becoming increasingly popular, which means the technology is accessible to a growing number of consumers.

Perhaps the even bigger question isn’t whether businesses can afford virtual reality, but wether they can afford not to utilize the technology. While the age of the technology means there are few case studies, businesses that have been early adopters are seeing significant results.

One series of virtual vacation tours resulted in a 40 percent return on investment in Germany, with a 180 percent sales spike for New York alone. When Merrell decided to create a virtual hiking experience at Sundance, social engagement jumped up over eight times and they sold 4,000 pairs of shoes from the campaign. (Link: https://www.shopify.com/retail/how-virtual-reality-helps-retailers-lure-in-customers-and-keep-them)

YouVisit, a company creating virtual reality visits for college campuses, said their customers saw a 30 percent increase in requests for physical visits. (LINK: http://diginomica.com/2016/04/29/yes-virtual-reality-can-lead-to-roi-youvisit-shares-their-business-model/). When the Miami Children’s Hospital began using VR for staff training, the staff retention rates went from 20 percent to 80 percent. (https://hscweb3.hsc.usf.edu/is/welcoming-2016-virtual-reality-technology/). According to Digi-Capital, VR is expected to grow to a 30 billion dollar industry by 2020.

In a world where consumers are constantly bombarded with grabs for their attention, virtual reality is one way businesses can stand out from the noise. While the technology is new and expensive, working with a virtual reality enabled studio negates much of those costs while expanding expertise. Despite being a new medium, many early adapters have shown promising results from their initial investments. Virtual reality can help retailers allow online shoppers to “try before they buy.” The tourism industry is quickly adapting VR’s potential for virtual previews and many businesses are adopting VR for employee training and continuing to find innovative ways to use the new technology. Virtual reality will likely make its way into several aspects of business — with the potential for a big return for those daring enough to explore the possibilities.