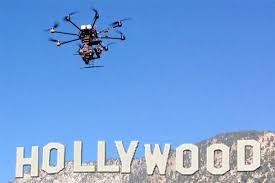 Given that drone photography has revolutionised the way in which we take images and view the world, it will come as no surprise that the technology has been embraced by the directors of blockbuster movies. Drones facilitate experimental film techniques and open up possibilities that were once thought impossible.

We don’t shoot Hollywood films, but at VisionAir we have long recognised the same benefits of aerial photography in NSW as our American counterparts. Just as drone photography is increasingly appearing in your favourite films, it is also the best way for your business to acquire incredible images that will make you stand out from your competitors in sales and branding.

The appeal of Hollywood drones is clear. It offers filmmakers completely new perspectives with minimal logistical difficulties. Previously, helicopters were generally used to get aerial photography for films, but they are greatly restricted by size and safety concerns. Drones can get much closer to the action than a helicopter, are able to fly through much smaller spaces and are not subject to the same flight regulations. It is for these reasons that a host of recent films, from The Wolf of Wall Street to The Expendables series have utilised aerial drone photography.

These are just some of the reasons that VisionAir, the aerial photography specialists, have been focusing on the technology for some time. We enjoy the freedom and flexibility afforded by the technology used by each of our talented VisionAir drone photographers in Sydney.

For VisionAir, as for filmmakers, it is the combination of aesthetics and practicality that draw us to aerial drone photography. Not only does it enable us to capture stunning images, it also serves many functions. From inspections of hard to reach places to birds’ eye views of real estate properties, aerial drone photography in Sydney and NSW is an extremely useful service and one that we are committed to delivering to the highest standard.

Drones have not only created many new artistic and practical opportunities, they have also made them financially feasible. Sydney aerial photography was once prohibitively expensive, as it required helicopters and large teams. Today however, VisionAir’s drone photography in NSW is now an affordable way for businesses to gather incredible images with which they can promote their brand or image. With VisionAir, you no longer need a Hollywood movie budget to get images worthy of the greatest films.