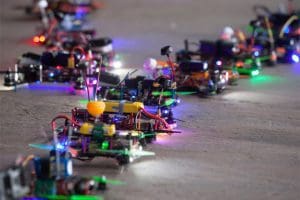 If there’s one publication in the world that has built a worldwide following based on stunning photography, it is National Geographic. The first edition of the now ubiquitous magazine was published in 1888 and the organisation itself had just 165 members. Today the magazine has a global circulation of around 7 million per month, in an era that has seen the print industry in general decline. Their continued success is, in large part, due to their embracing of technology and, not surprisingly, this now includes drone photography. VisionAir has also recognised the great potential of aerial photography and we provide professional drone photos to Sydney organisations that want high quality images from new perspectives.

Recently, National Geographic combined new technology with the ancient world to capture some breathtaking footage of the 3000-year-old Nubian pyramids in Sudan (see the footage here). Few people have had the opportunity to visit the site, let alone see it in all its glory from the air. After more than a century between visits from archaeologists, the drone photography proved to be an amazing and illuminating addition to the understanding of the site.

There may not be any examples of clearly visible remnants from life in Australia all those millennia ago, but drone photos in NSW offer the same broad perspective and previously unseen angles that made the shoot in Sudan so successful. VisionAir use the latest drones, skilled and certified pilots and the most experienced drone photographers in Sydney to deliver similarly stunning footage.

The Nubian pyramid aerial photography was not only an exercise in historical aesthetics. Drone photography allowed archaeologists to gain a much greater understanding of the layout of the site and how the individual pyramids were connected to one another, the burial sites and the temple.

Many thousands of kilometres and a world away from the Sudanese desert, VisionAir has been utilising these same practical applications in our own drone photography in NSW. Structures are much larger than they were 3000 years ago and it is extremely difficult to inspect properties in their totality. What is impossible at ground level is now a possibility thanks to aerial photography. Because they are unmanned, drones can get much closer and provide more detail than manned vehicles. As such, drones are fantastic for assessing damage, inspecting for repairs or maintenance on existing structures and for providing an overview during the development or construction stages.

From ancient cultures in Africa to contemporary society in Australia, drone photography is providing us with stunning and practical images that have a multitude of uses. National Geographic are doing a fantastic job in Africa, but for high quality professional drone photography in NSW, you can’t go past VisionAir.