Behind the Scenes at TEDxSydney From a Photographers Perspective – Part 2 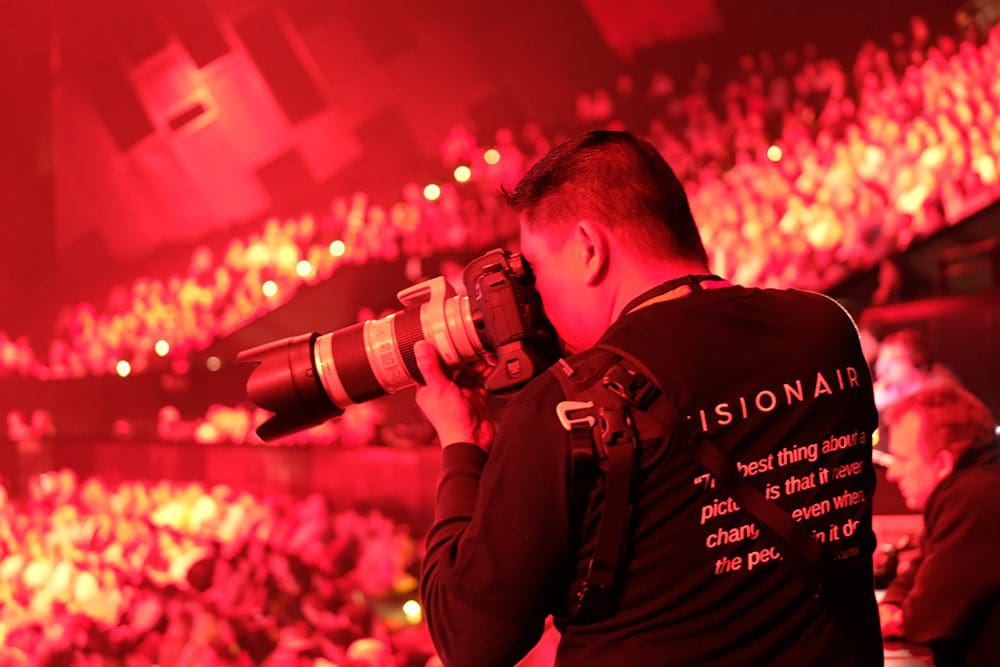 Sometimes you don’t have to think about life. Let me explain. For instance, when an opportunity arises such as photographing one of Sydney’s most iconic events, it’s not something you turn a blind eye to. When I first heard about an unique opportunity to capture photos at TEDxSydney for Visionair Media I couldn’t say no. After taking some urgent annual leave from my full-time job, I found myself at the venue.

Meeting the experienced photography team was a highlight and working with a diverse crew made for an incredible experience. So, without further ado, and continuing from part one, let me recount the second part from my experience of photographing behind the scenes at TEDxSydney – a photographer’s perspective.

Behind the Scenes of Visionair Media’s Photography Coverage

Visionair Media sponsored TEDxSydney and brought together a host of photographers capable of photographing people and event photography. There were a couple of photographers who had covered previous years, but the rest of the team we were new to the event. With an array of gear at our disposal, ranging across various camera brands, each photographer had a specific kit to cover their assigned position.

With four photographers assigned to the adjoining Hub, the rest were positioned in the theatre capturing the speakers, audience and happenings from various angles. A seasoned photographer even found his position above the audience and stage in the gantry. Due to the high elevation above the stage the area was not a place for the faint-hearted!

To make every photographer’s life easier, amazing volunteers paired with each creative. Their job was to deliver partially full memory cards back to the editing station within the media room. A minimum of three numbered memory cards per photographer were always on the go for the majority of photographers ensuring they could capture moments at all times. The runners certainly had a full-time job keeping up with all the cards.

My photography brief was slightly different from most. I was allowed to cover all spaces as this would help provide an overview of the entire day and assist in preparing an article after the event. Something I didn’t account for was the size of the building, having complete access to all areas translated into a lot of walking!

My goal was to cover the behind the scenes, portraits of speakers and the Visionair crew as well as write two articles about TEDxSydney. It was going to be a juggling act as I didn’t have a runner, so across the twelve hours of photography, there was much to do and many places to be.

Behind the Scenes of Visionair Media’s Post Processing Station

With each photographer photographing selected images, volunteer runners were continually delivering photos across the entire day. The process was well planned and involved three stations in the editing process. First, the runner would leave the memory card in the ‘in-tray’ and then the person responsible for uploading the images would insert the memory card into the computer. They would then create a new folder associated with the photographer’s assigned number (all memory cards carried a label with the photographer’s number, either 1 through to 15). Once the photos had finished uploading, the folder was written down on a master sheet and shared with the two editors.

The two editors would then open the newly created folder containing the jpeg images and begin to import the photos into Adobe Lightroom. At this stage, the editor would rate the pictures and then edit the ‘keepers’ before exporting the files out into the final portfolio. Lightroom was synced to export the edited photos to flickr.com, but unfortunately, due to unscheduled/unforeseen maintenance, the entire flickr.com site was offline and unavailable at the time of the event.

Liaising with the Social Media Team

Also part of the editor’s job was to provide images of the speakers quickly to the awaiting social media team so they could publish pictures in almost real time. Considering the time it took for the runners to get back to the media room from the theatre, followed by image uploading, then editing and export times, all images appeared online relatively quickly. The three computers plus the team of three in the post-processing area didn’t have a chance to stop the whole day – it was a tough and demanding job to get the images out promptly!

Taking Photos Behind the Scenes

The most exciting part of photographing backstage was getting to meet the speakers and the artists. Watching each speaker or group prepare to go on stage was something I wish the audience in the theatre could witness. The camaraderie with the backstage crew was fantastic and seeing everyone work together seamlessly behind the scenes was remarkable.

While each act was on stage, a lot was happening behind the scenes. The concentration shown by each speaker was apparent as they contemplated addressing the broad audience. When microphones found their positions, the silence and concentration became intense. As an experienced event photographer, I tried to give each person space in these times so they could prepare rather than have a distracting camera pointed in their face. I had to be mindful that I was in their area and not the other way around.

While waiting to go on, each act was asked to wait around a small group of chairs before they were introduced and escorted by a stage manager to front-of-house. Everyone had a different way of preparing before their big moment on the red circle. The nervous tension was evident on some faces, but for many they were able to hide the emotions by pacing up and down, taking a selfie, stretching or just by watching someone else live on stage.

Not Your Average Speaking Lineup

With a line up including the self-proclaimed happiest man on earth, a geneticist, an architect, a high school band, a scientist, an actor, a DJ, a violist, a dentist, an entrepreneur, a geologist, a writer and journalist the day was certainly not going to be boring!

It was exciting to see each speaker and performer address the main subject of TEDxSydney – ‘Legacy’. In all of their sessions they talked about or performed the answers to the following questions;

Who are we?
What have we inherited from the past and what are we doing today about it?
What do we want to be remembered for?
How about our collective future, what is the world doing and how can we do better?
How can we be smarter and more sustainable using compassion, kindness and respect?

Many recounted life’s experiences to address the questions. From talking about the latest cryptography breakthroughs to listening to the songlines of an accomplished violinist, everyone’s ideas were worth sharing.

Trying To Be Everywhere At Once

As I waited for each speaker to finish and have their microphone removed, I then asked if I could capture their portrait. With the very tight timeline due to numerous events happening in adjacent buildings managing the schedule was the hardest part of covering the talent backstage. On several occasions, I merely had seconds to obtain the shot before proceeding to a function setup or talking with the artist liaison to achieve the next photo. In this photograph of Maxine Beneba Clarke, the photo was captured in under 10 seconds as I had only just made my way back from photographing a private lunch located near the Hub.

A Stand Out Moment Back Stage

I was unable to photograph every speaker unfortunately as there was plenty to cover elsewhere. Fortunately for me, I found myself backstage at the right time when Mr Jaku started speaking. At 99 years of age, this Jewish-German survivor of the Holocaust had a distinct passion for happiness, friendship and life. Watching him interact with the crew backstage almost brought a tear to my eye.

His kind, generous nature was infectious and the words he spoke were full of wisdom. It was three sentences in his speech that resonated with the crowd, and I wanted his portrait to portray his own words:

Capturing Portraits of the Speakers and Artists Behind the Scenes

Photographing the tenth year of TEDxSydney was undoubtedly an achievement, and I know the team and myself look forward to capturing many more years at TEDxSydney.

Missed Part 1? Click on the link below – Behind the Scenes at TEDxSydney From a Photographers Perspective – Part 1